During our last tour, a student asked us about some of the strangest gigs we've ever played.  Well, I spent this entire past weekend playing for the circus.

To be technical, organ AND bass.

Now, I've played piano for most of my life, but I typically perform in public once a year at the absolute most.  Certainly not in front of the 30,000 or so people that flooded the Civic Center arena for 6 shows in three days.  But I got a last minute call looking for someone who could play bass lines, read chord changes, and generally fake a whole bunch of musical styles very quickly.   I guess that's me.

We had one rehearsal before the first show.  I showed up, got my book, and quickly realized that my parts were a very mixed bag.  Some of them had bass lines, some melodies, most chord symbols, many handwritten, some illegible, and lots with markings scribbled all over them (some of which we followed and some that we didn't).  Rehearsal wasn't quite long enough to cover everything so some of the music was left over to be sight read during the first show.  And a couple of the tunes that we worked the hardest on ended up getting cut before the next morning's performance.

Circus music doesn't stop!   Especially during the first half of the show, we played nearly continuously for an hour straight.  Clearly if I play this gig next year, I need to practice more piano beforehand because my hands and arms were SORE.   When one tune ended, followed by a "Tada" chord for the performer, we usually had about 1-2 seconds to turn over the music and start the next piece.  This was murderous during the first few shows when I didn't really have enough time to move around my pages, figure out what style the piece was is, and try to decipher my handwritten notes about the form.  By the last day, though, I had memorized enough of the book to even look up from time to time and check out some of the performers.  The shot below is the view over my stand before the show began.  Under the crash cymbal, you can see Anna Louise, the dancing elephant (who is apparently very picky about her music and won't dance if the tempo is wrong). 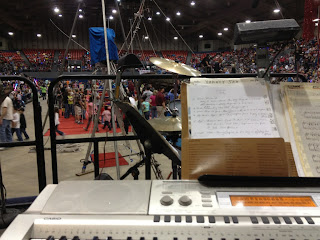 It was definitely a fun experience, and ranks pretty high on the unusual gigs list for me.  To be totally honest, I'm a bit glad I was on keys for this one.  The trumpet book is brutally taxing (and the guys playing it did a terrific job), and with a couple of busy weeks coming up play lead on Pines of Rome and Chicago back-to-back, I was grateful to save my face.

Now if only I could figure out where my weekend went.....

-Alex
Posted by Mirari Brass Quintet at 7:28 PM No comments: