What the heck do you do with the Tuba?

Last night was a new one for me.  I booked a window seat on American Airlines for "Tuba Dimick".  While I realize it sounds like Glen just got his new copy of the Sarah Palin Baby Name Book, it was actually part of our upcoming weekend in California.  As the person that does most of the travel plans and reservations for the group, this is an issue that we've been wrestling with for some time now, especially as we seem lately to be spending more time out on the West Coast than in the past.

The problem with the tuba (where to start?), of course, is that it's large.  Extremely large.  It won't fit in the overhead compartment.  So the obvious answer is to check it under the plane.  Unfortunately, these things seem to dent merely by breathing on them, and in order to provide even a modest amount of protection, an expensive Flight Case is required.

This adds a lot of weight to the instrument, and makes it even larger.  Problem No. 1 is that even with the flight case, you're still living on borrowed time.  At some point, the thing is going to fall off of a belt or out of the baggage cart and be damaged.  Not fun.   Problem No. 2 is that the airlines count the instrument now as being both oversize and overweight.   While some carriers (i.e. Southwest) are good about keeping the costs to about $100 extra in total, others (i.e. Delta) can charge up to $375 EACH WAY.

(we did manage once to keep the instrument from being overweight by casually resting an arm on the flight case while it was being put on the scale, miraculously resulting in the entire case weighing in at exactly 49.5 pounds!  I'm sure the ticket agent knew exactly what we were doing but clearly she realized that tuba players have enough handicaps in life as it is and cut us a break on the weight charges)

Problem No. 3 is once you reach your destination, we still have to haul around the stupid hard case, which also takes up the entire backseat of a car and is generally a huge pain in the tuckus.

So now, our new strategy is, whenever possible, just buy the tuba a seat on the plane next to Glen.  I spent an hour on the phone last night with a very nice representative from American Airlines who had never done this before.  Turns out they have a policy in the books for buying seats for cellos, but nothing about tubas.  Go figure.  But once we finally haggled over the details of why I shouldn't have to pay a phone booking surcharge when there's no website option for Tuba-As-Person, and why the 9/11 Security Fee probably doesn't apply here [obligatory WMD joke], it was done.   Now we can bring a soft gig bag that is easy to carry and not feel stressed about instrument damage.   The picture at the bottom is what's going to be happening, except (that's not Glen--just some guy Google Images pulled up, and we are NOT going to be bringing a hard case ON the plane.  Fellow travelers from Indianapolis to San Francisco, rest easy--you won't have to sit behind that guy).

p.s.   We're on tour next week in Chicago and Wisconsin.  Come out to see us if you're nearby!  Schedule details on the website http://www.miraribrass.com/

p.p.s   Our new cd, SPIRES, comes out on Saturday, 10/20!!   Join us for the release party on that Saturday, 8pm at Lennie's Pub in Bloomington, or you can pre-order it from the website! 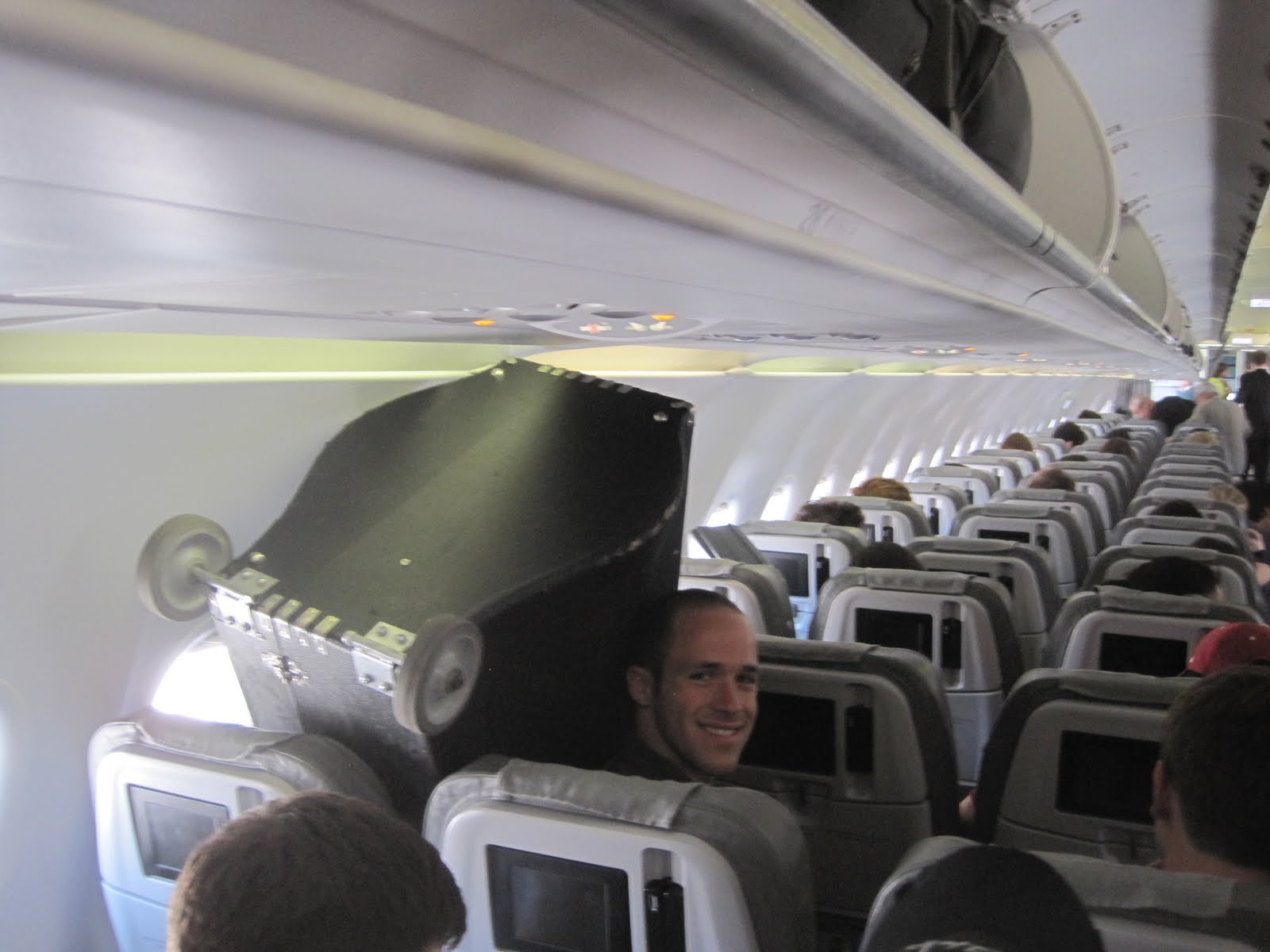 Posted by Mirari Brass Quintet at 6:45 AM